Every product has been patiently thought out, planned, designed, marketed, and sold. Sometimes, it’s easy to overlook the beauty of everyday objects. Today’s spotlight is playing cards.

Playing cards, on their own, are a great way to pass the time, especially when you’re in an ‘unplugged’ situation (up the lake, on the beach, camping, etc.) It’s also a great way to market a brand; casinos often give out decks of used playing cards (often ‘punched’ with a hole to mark that they’ve been used in the casino). It’s something that may be thrown in a junk drawer at home, but when the power goes out and you need an evening’s entertainment, there’s always solitaire!

The first set of cards is SiShou. Meaning ‘Four Beasts,’ the SiShou playing cards are a set of 56 cards featuring the four ‘beasts’ of ancient Chinese history. The dragon, phoenix, tiger and tortoise are represented in each suit. The SiShou cards will be printed with the United States Playing Card Company as part of a limited edition series.

And in true Kickstarter fashion, larger donations to fund this beautiful set of cards include the chance to have limited edition prints, uncut sheets, and signed posters.

SiShou is available on Kickstarter for funding until February 28, 2013. 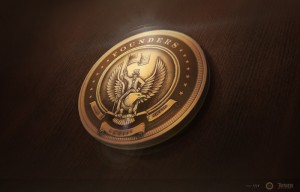 The second set of cards is Founders. Taking on the theme of the ‘founding fathers’ of the United States, these unique and detailed cards feature a detailed, rich concept with a beautiful take on American hisotry. By repurposing the traditional four suits with a ‘class’ system (Nobility, Clergy, Merchants and the People), these cards take on a nation with a rich history. And just like SiShou, Founders will be printed with the United States Playing Card Company.

Larger pledges of the beautiful Founders playing cards have the chance for limited edition collectors coins, t-shirts, and the ‘Inaugural Print’ poster.

Founders is available on Kickstarter for funding until March 13, 2013.

This site uses Akismet to reduce spam. Learn how your comment data is processed.